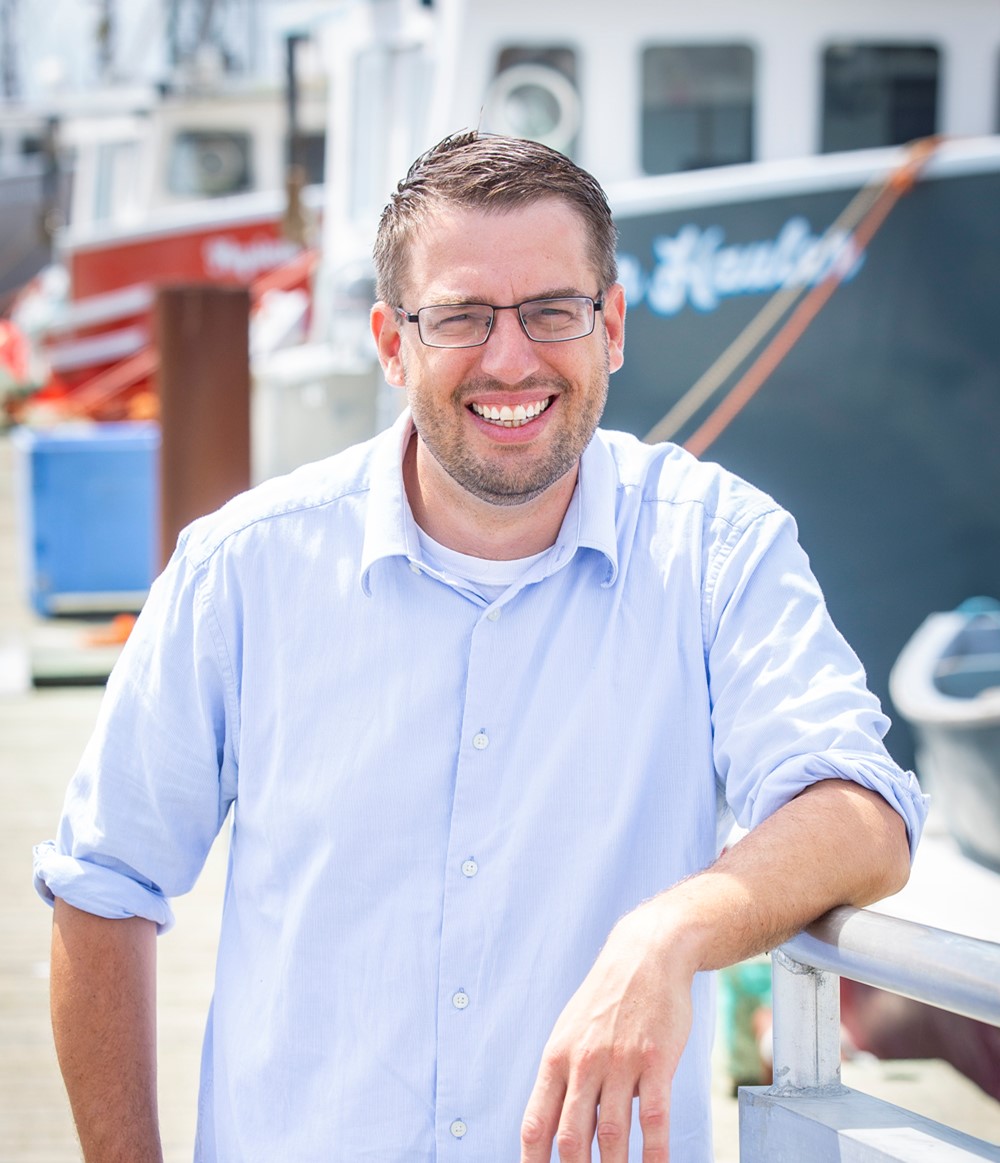 (Article first appeared as Guest Column in the Navigator Magazine)

Over the last six months, the fishing industry has been seized by the announcement and supporting consultation on the development of Canada’s Blue Economy Strategy. Roundtables have been held, papers have been produced, and the seafood sector enthusiastically participated, providing the Minister with their perspectives on how to best maximize the value of our wild-capture seafood sector while supporting resilient, viable and flourishing coastal communities.

Fish and Seafood is The Leader in Canada’s Ocean Economy

Unfortunately, what is often missed in these conversations is how ‘good’ the wild capture fish and seafood sector actually performs relative to other successful jurisdictions.

Here in Canada, the fish and seafood sector represent about 0.3% of Canada’s total Gross Domestic Product (GDP is an estimate of total economic production in the country). Although this number may seem small, it is impressively comparable to other nations with ‘successful’ marine economies – again, in the UK it is 0.3%, in the US it is 0.06%, in New Zealand it is 0.4% and in Australia it is 0.2% (see Figure 1). 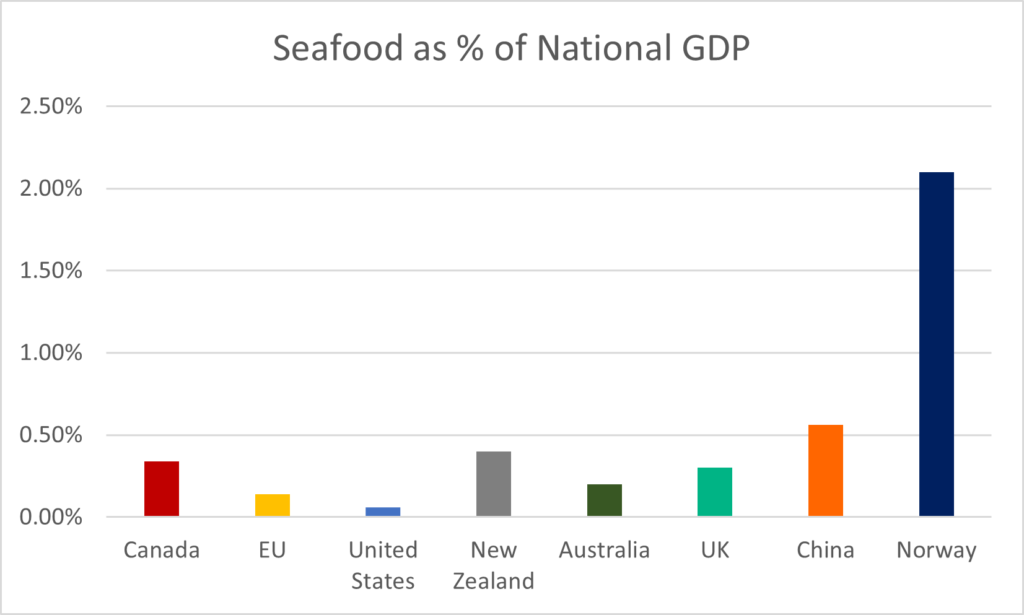 But “Blue Economy” is a broad term that includes more than fish and seafood production. It also includes transport, non-renewable resource extraction, shipbuilding, technology, recreation and a myriad of other sectors linked to the marine environment. More broadly, the Blue Economy contributes about 1.6% to our national GDP. Compared to some other nations with well developed marine economies, this number can seem quite small – in the UK it is 8.9%, in the US it is 1.5%, in New Zealand it is 1.4% and in Australia it is 3.9% (see Figure 2). 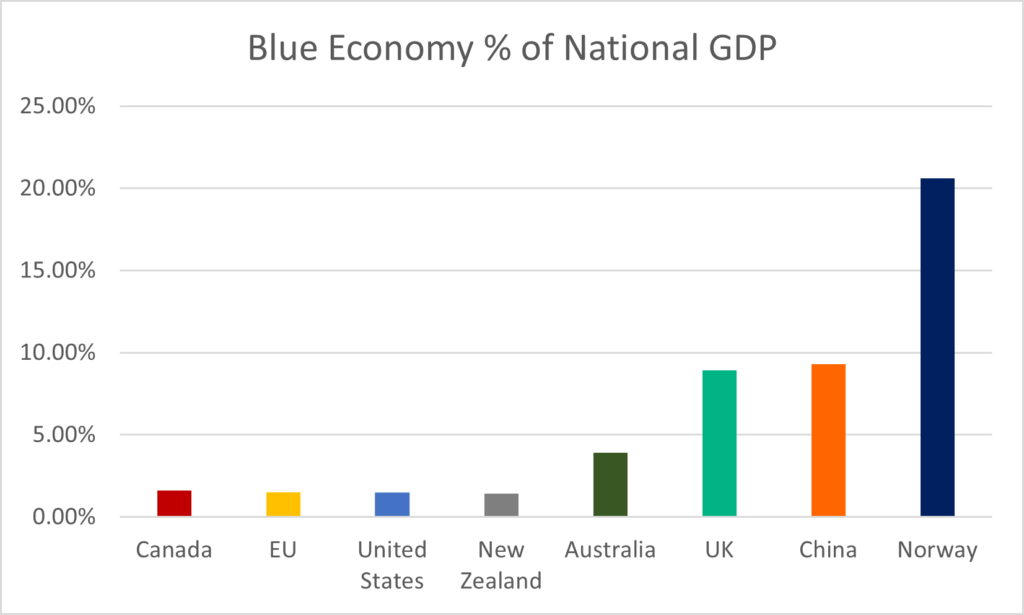 So as we look to Canada’s Blue Economy Strategy, the key area for improvement is the sectors outside of the seafood industry. While it sounds impressive that the fish and seafood sector currently comprises 21% of Canada’s marine economy, that’s a number I’d like to see lower. It may seem counterintuitive coming from someone within the seafood sector but there is room for substantial growth in other ocean economies and their success will lead to a stronger, more diversified blue economy.

Although the fish and seafood sector is a leader in Canada’s Blue Economy, that doesn’t mean it should become stagnant. After recognizing how well the Canadian fish and seafood sector is actually performing relative to other progressive jurisdictions, the natural next question is – how can we do even better, producing higher value from each pound of seafood Canadians land, which in turn, will support resilient and viable coastal communities?

The default response is that the government should provide financial supports for the industry. Harvesters will ask for support to purchase equipment to improve the quality of landings; processors will request support to purchase equipment that elevates the shelf position of their products; marketing groups will request support for brand or product launches; and, all will follow the same tune that if you provide financial support to the industry, it will pay dividends. While this may be true, I question whether there is another path.

Creating an Environment for Success

There is general agreement that as in increasingly global industry driven by technology and sustainability, the fish and seafood sector requires constant investment to be competitive and successful. Whether it be slurry ice machines, chilled holding tanks, improved filtration systems, computerized portion cutters, or ultra-efficient refrigeration – the need is the same. Changing harvest and production methods to achieve thresholds required for market access requires access to capital. Lots of capital.

Where does this capital come from? Generally, it is provided by private industry (i.e., through banks and other lenders) or through government programs (e.g., ACOA, Atlantic Fisheries Fund, etc.). Accessing this capital requires a business plan and some certainty of recovery on that investment. In reality, that certainty of recovery is tightly linked to stability of access to the resources. After all, what lender would provide a harvester with the millions of dollars needed to build a modern harvesting vessel without certainty that the vessel could fish to repay that investment?

Providing each harvester with the knowledge that their licence and resource allocation shares are evergreen has other benefits as well. Increased access for Indigenous participants can be facilitated by this approach, as new entrants into the fishery can be integrated via willing buyer/willing seller transactions – safe with the knowledge that existing investment can be recovered via these voluntary processes and no new effort is being created. It allows harvesters to rationalize, modernize and invest in harvesting capacity to match the resource and also encouraging good stewardship by incentivizing participants to no longer fight over the size of their piece of the harvesting pie, but to instead focus on growing the pie larger so each slice gets bigger.

Stability is also needed as the government moves towards its self-identified targets for marine spatial protection. What investor would provide funds when the harvesting community is constantly being pressured to permanently give up productive fishing areas? The benefits of spatial protection have yet to be realized, despite near to 15% of Canada’s waters being currently closed to fishing effort. At the same time, closing important and productive fishing areas means that boats must travel further, and fish harder for the same catch – basically increasing the amount of carbon released per pound of seafood harvested. Avoiding this trap requires that harvesters have the assurance that their fishing areas will be respected by marine conservation efforts – after all, their livelihoods, past, present and future, depend on it.

Since 2015, we have seen a profound re-write in the approach to Fisheries Management in Canada. The Fisheries Act was fundamentally changed and legislative requirements have been introduced that now have shifted policies into legislation/regulation. The unfortunate side effect is that our regulatory systems has become much less agile and less able to respond to change. For example, as we have mandated rebuilding obligations for species such as Southern Gulf Cod that include target population levels not seen for decades and defined as unachievable by DFO Science, we have to ask what the relevance of a rebuilding plan is for a stock that hosts no fishery, where fishing is not shaping its trajectory in any way, and where the prospects are poor. Responding to the impacts of climate change will require that we adapt our population targets for marine species to be realistic and based on the current environment – not one based on the ocean of decades past.

Lastly, we need the Department and the government to move away from painting a picture for Canadians and the world that our oceans have been stripped bare by the fishing industry – this could not be further from the truth. Near to 90% of Canada’s wild fish and seafood (by value) has some form of third-party sustainability certification attached to it. Our management system is respected worldwide for its integrity, scientific rigor, and policy guidance – all contributing to keeping fisheries sustainable and worthy of bearing that blue checkmark needed for discerning consumers worldwide. We have worked to reduce the impacts of our gears and have led the protection of highly vulnerable and special areas in the ocean – and unlike most other jurisdictions – our marine conservation areas have generally the highest level of protection to industrial uses. Our oceans are not in need of being saved, rather they are productive and well managed to the betterment of future generations. This success must be demonstrated to the world by the very regulator that manages it.

In closing, while the fish and seafood sector in Canada is punching above its weight, there is still a role to play as we look to the future of the Canadian economy. By creating an environment conducive to the success of its participants, we can continue to make incremental improvements that will carry with them the coastal communities relying on the sustainable usage of our nation’s oceans.

Dr. Vascotto has a PhD from the University of Toronto and has spent more than two decades working in fisheries, including in science, research and assessments. He’s worked within both the public and private sector and has been Executive Director of the Atlantic Groundfish Council since 2015.