In March, word of a single-year 30% decline in Northern Cod attracted the attention of media, scientists and environmental groups from around the globe.  The world was clearly watching Canada’s management of this stock.

It was quite telling to see how various stakeholders responded.

From a scientific perspective, I was disappointed but not surprised with the dramatic decline. Since 2015, our organization (the Groundfish Enterprise Allocation Council – GEAC) has repeatedly expressed concerns publicly. The natural environment was changing, portions of the ecosystem needed to sustain the cod growth were missing, cod recruitment was still too low, and fishing removals were increasing too fast. Unfortunately, our cautionary warnings were ignored.

Our own members continue to advocate a more cautious approach to setting catch levels. One of these, a plant owner who relies solely on processing cod (largely from inshore fishers), operating at only 50% capacity, continues to ask DFO to take less cod out of the water. This reflects a cooperative approach towards a long-term sustainable and viable fishery.

Concerns that increases were too aggressive were echoed by independent research scientists and many DFO scientists.

On the other side of the issue, the FFAW and GIDC, have been quick to downplay the Spawning Stock Biomass (SSB) plummeting below the level when a moratorium was called in 1992. When the early warning signs of poor performance by the survey index were observed in 2017, DFO was pressured by those same groups to increase catch to levels that didn’t align with the growth of the stock. It ignored scientific advice that catch be kept to the lowest possible level.

In recent weeks, the FFAW and GIDC have attempted to redirect the conversation away from important facts that harvesters, who make significant financial investments based on such information, deserve to know:

Still deep within its Critical Zone and declining, the stock is extremely vulnerable to fluctuations induced by nature. Additional removals by the fishery increases the risk of another collapse.

Just as we have for other groundfish stocks, GEAC will continue to advocate for the conservation of Northern Cod.  This will mean reducing fishery removals to a sustainable level and helping the stock to rebuild, at least until it grows above its Critical Zone.

GEAC’s members are mostly family-owned and operated companies based adjacent to the resource. They are committed to the long-term health of fisheries. We believe in a balanced fishery that includes inshore, mid-shore and year-round harvesters as all have an important role in achieving greater value and employment from the resource. We believe that stability in resource allocation sharing remains as an essential ingredient in promoting wise and conservative use of that resource.

We ask other participants to redirect their efforts to working together to find a more secure and prosperous future within the groundfish fishery in Atlantic Canada. 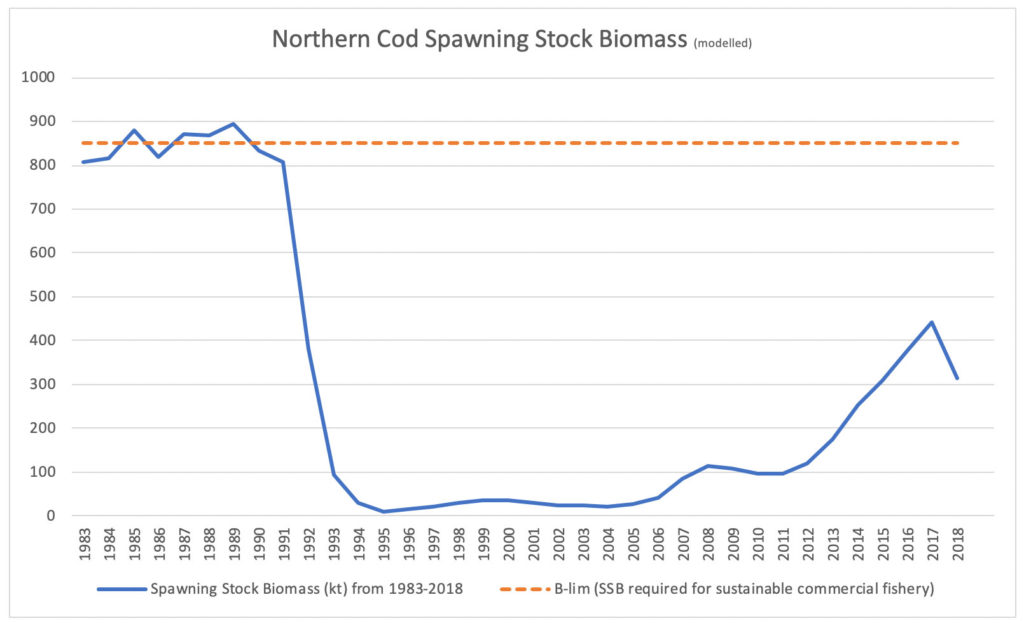 Caption: Despite growth in the stock from 2005-2016, the Northern Cod fishery is still well below levels identified by science as needed to support a viable and sustainable commercial fishery.